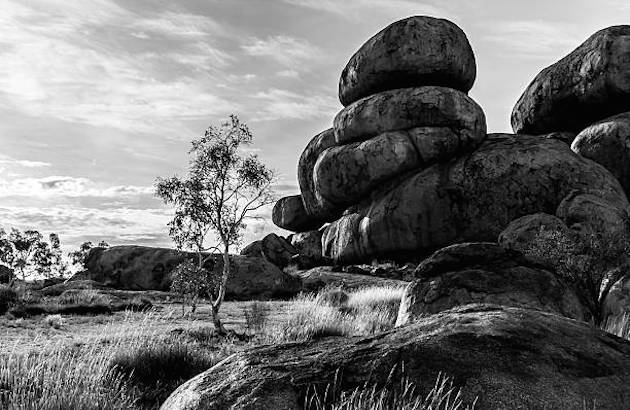 MAKARLU blends cultures, places and times by combining Japanese 'ma' with Aboriginal 'Karlu Karlu'. Inspired by nature, these terms bring timeless and beautiful concepts together for a sense of space and balance.

Ma is a Japanese word for space which is roughly translated as a ‘gap’, ‘space’, ‘pause’ or the ‘space between elements.’ It is often described as a consciousness of place, not in the sense of physical elements or structures, but rather in the parallel perceptions of the physical and non-physical.

A consciousness of ma cannot be achieved through physical elements alone, it requires the imagination of those who experience these elements. Ma can be understood as an experiential place understood with an emphasis on ‘the space between’.

The concept of ma is best illustrated in this old poem:

“Thirty spokes meet in the hub, though the space between them is the essence of the wheel;

Pots are formed from clay, though the space inside them is the essence of the pot;

Walls with windows and doors form the house, though the space within them is the essence of the house.”

In a similar fashion the concept of ma can be related to health, function and movement:

“Musculoskeletal structures support our human body, though the space between them is the essence of human movement.”

Karlu Karlu is a collection of massive granite boulders standing at up to 6 metres (20 feet) high and formed by erosion over millions of years. Many of the giant stones are naturally but precariously balanced on top of one another, appearing to defy gravity yet remaining delicately balanced through the ages.

The boulders are strewn across a wide, shallow valley south of Tennant Creek in Australia’s Northern Territory. In the fashion of Uluru, at sunrise and sunset the boulders appear to glow and change colour, from pink to orange to bright red.

Karlu Karlu is the local Aboriginal name for the Devils Marbles Conservation Reserve which is located in the traditional country of the Warumungu, Alyawarra and Warlpiri peoples. Karlu Karlu literally translates as ‘round boulders’. Ancient creation legends for the area are passed from generation to generation by the traditional owners, with many of these stories being secret and only a few able to be shared with visitors.

One of the main Dreaming stories for the area which can be told to non-Aboriginal people relates to how Karlu Karlu was created:

“Tradition tells of ‘Arrange’, an ancient ancestor, who came from a hill nearby and walked through the area. While walking along he made a hair-string belt, a type of traditional adornment, worn only by initiated Aboriginal men. As he was twirling the hair to make strings, he dropped clusters of hair on the ground which turned into the big red boulders. Arrange finally returned to his place of origin, a hill called Ayleparrarntenhe, where the legend says he still lives today.”