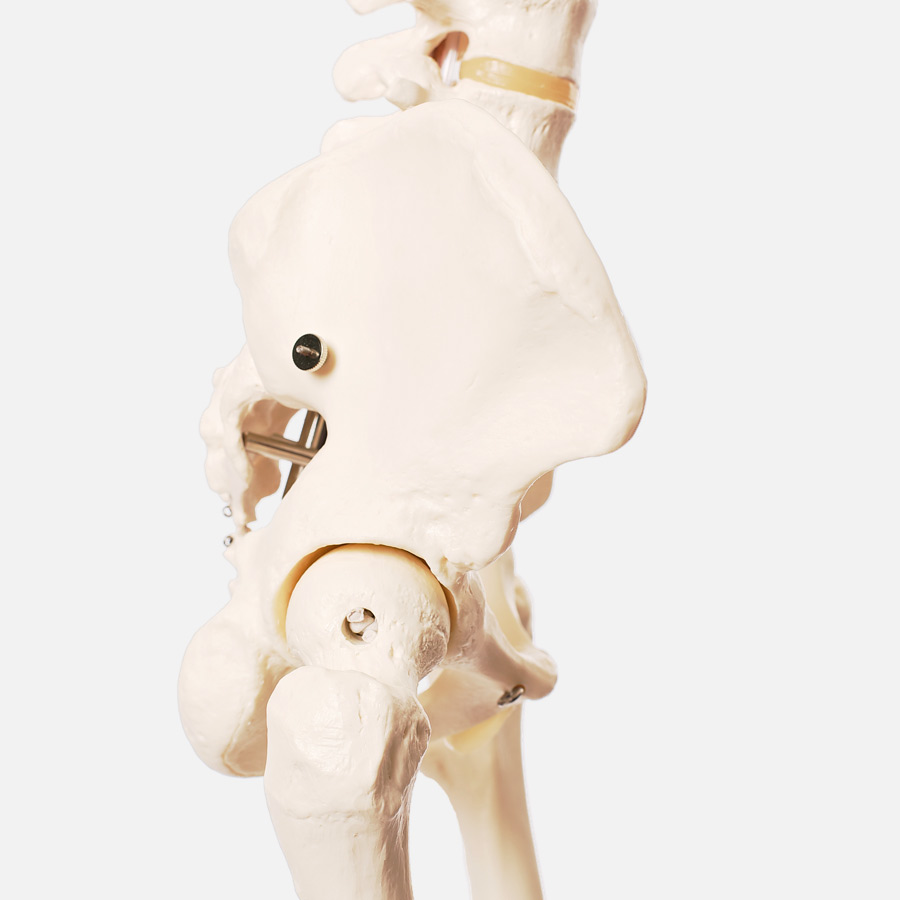 Hip replacements are more common than many think

In 2012-13 there were about 32,000 hip replacement procedures within Australia alone. Obviously this means it is quite a common procedure affecting a substantial number of people, people who could be walking or limping into a typical pilates studio about to have a hip replacement or having recently had one. This article is about sharing some ideas and insights into what a hip replacement is and how to deal with clients affected by them.

What are hip replacements and why do people have them?

A hip replacement is generally used to describe the relining of the bone and surfaces of the hip joint with artificial parts called prostheses. The reason why this occurs is generally due to the loss of the articular cartilage of the joints because of wear and tear and arthritis. Sometimes the wear and tear can be attributable to sports and activities like golf, or because of poor gait patterning following knee or ankle injuries. There are also a substantial number of people in their 20s and 30s that have undergone hip replacements because of congenital defects.

What ever the reason for the hip replacement, it is considered a last resort for those people who have not been able to achieve pain relief through exercise and therapy. Many people are sent to pilates and the gym before they have their surgery to prepare them for the operation, or to lose weight. When someone comes into your studio you need to know:

//   Has a date been set, if so when?
//   If they have already had the surgery, when was it (there are certain precautions we will discuss later);
//   The reason for the hip replacement;
//   What type of prosthetic is going to be used or has been used. Sometimes this will not be known prior to the surgery, as the surgeons may change their minds on the day of the surgery when they see inside the joint;
//   The type of surgery – was there an anterior or posterior cut, and whether or not there was an anterior or posterior dislocation of the joint. We will discuss this later, as it does impact on the contraindications for exercise;
//   The client’s current pain levels and tolerance for exercise.  Remember they would not be having a hip replacement if they were not already in significant pain.

This occurs when there has been a fracture of the femoral neck. In this situation just the ball and stem of the joint is replaced. This sort of situation is likely to occur because of a “fall in a person with fragile bones” or because of high trauma, such as a car accident. In these sorts of situations the person generally goes straight to surgery soon after the fracture. You are not going to be seeing these clients before the surgery. Note that for hemiarthroplasty patients:

//   Should be weightbearing ASAP, dependant on their surgeon’s protocols;
//   Will be in hospital one week minimum;
//   Exercise precautions – you do not want to see the person falling in the studio, but you do need to help them become mobile and  with full weight bearing as quickly as possible.

As it will take about 6-8 weeks for the muscle to repair itself following the trauma of surgery, you need to be careful not to overload the tendons.   Accordingly, it is important that you are careful with:

//   Alignment (as always);
//   How much muscle load you apply, as initially your focus needs to be on Range of Motion, not Strength. Strength will take at least 12 months to achieve.

If you were going to have someone focussing on a strength exercise, focus on one muscle group at a time, e.g. quads, hamstrings, then abductors then adductors. Once there is correct recruitment happening in these muscle groups you start to combine the muscle groups into the more complex pilates patterns. It is pretty standard pilates programming, but never forget the basics when it comes to this sort of stuff.

Needless to say, you are wanting to have this group of people upright and working on correct standing and gait for the first 10 weeks, so most likely look at exercises such as these listed below:

//   Ankle ROM work on the foot corrector;
//   Standing at the end of the caddie with a foot in strap doing leg lifts, circles;
//   CoreAlign (if you have one) hip extension work, such as hoof;
//   Assisted mini squats on the end of the caddie (refer image one below);
//   Abduction presses into a theraband.

Keep the classes to about 30 minutes with a focus on maybe three to four 30-minute classes, rather than pushing them to a full hour class. Remember they need to recover from strong trauma to their bone and muscle, so will be fatigue sooner than normal.

A total hip replacement means that:

//   The cup of the acetabulum is replaced with  metal, ceramic or polyethylene;
//   The femoral head will be replaced using either metal or ceramic materials;

Generally, there will be no ligamental stability other than through the negative pressure that occurs from the ball and socket fitting together.

Joint stability is going to be a big issue for this group of people, as they will have no ligamental support after the surgery. This group will probably be sent to you before the surgery in order to strengthen them and assist in their postoperative rehabilitation.

When working with them pre-surgery it is important to try and encourage them to:

Some ideas for this group of people include:

//   Assisted squats;
//   Scooter, but make sure that they are at an angle so that they have room to swing their hips. In other words have them standing on a box or equivalent to elevate their height so that the press-out leg is at greater than 90 degrees;
//   Wunda chair leg press, care with how much flexion the person can tolerate, remember deep flexion of the hip could be painful;
//   Wunda chair standing leg press;
//   Caddie standing arm work – have the person practice performing some reps on one leg;
//   Bean bag series to help them strengthen their wrists and forearms. 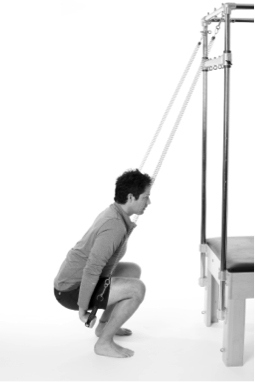 Assisted squats pre-surgery are great, but this could be too deep for people in the hip surgery category, work within their tolerance. 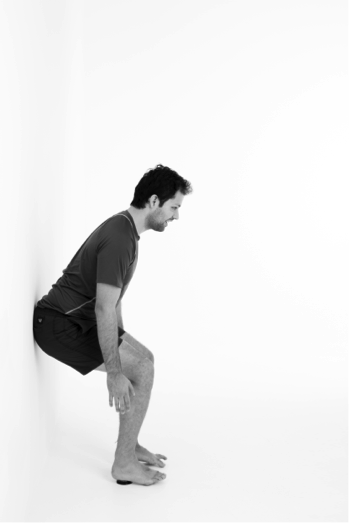 In undertaking a mini squat remember that a person may have limitations in their ankle ROM, so help them by putting in small blocks or half foam rollers as it will assist talus glide and improved lower limb squat.

Post-surgery this group of people will be treated differently depending on a number of important factors, namely:

It is important to remember that when the surgery is performed, the surgeon needs to dislocate the femur from the acetabulum in order to get inside the socket. This is done when the patient is anesthetised and the surgeon then lifts the femur from the knee, twists it into the acetabulum and pulls the femur out of the socket. Sounds a bit gruesome doesn’t it, and yes it is! The biggest issue used to be that for many years the surgeon’s approach was to anteriorly dislocate the femoral head. These days the more common and safer approach is for the surgeon to posteriorly dislocate the femoral head. If someone has been unfortunate enough to have an anterior dislocation they could have quite a few more complications and greater risk of postoperative dislocations. Remember, all of the dislocation occurs before the surgeon cuts into you.

In recent years the standard surgical approach has changed from a surgeon cutting posteriorly through the gluteus muscles to perform the surgery to an anterior cut of the thigh. The anterior approach is considered to have less complications but it is not yet universally applied. Remember that such a surgical procedural change means new training, even new hospital equipment and so can take some time to filter down to various hospitals.

Given all of these factors it is important to remember that for someone having undertaken a total hip replacement, in the first three months (12 weeks) post-surgery you should avoid:

All of these things can increase the risk of another dislocation within the hip socket. However, that does not mean the person should be wrapped up in cotton wool. It does mean that when you are working with them you:

//   Avoid things like reformer, caddie and wunda chair and leg presses as it is too easy for the person to go too deep in their hip flexion. If you are working with people with these exercises, find ways to lower the bar on the reformer or to block range so that the flexion is controlled;
//   Focus on abduction exercises to strengthen the glutes, possibly starting with a band around the thighs and have them pressing out into the band, then adding in skating (preferably on CoreAlign or an allegro reformer, as it is easier for them to get onto the equipment);
//   Focus on hip extension exercises, remembering to be careful to keep the leg lever short so as not to load or challenge the already compromised hip socket. 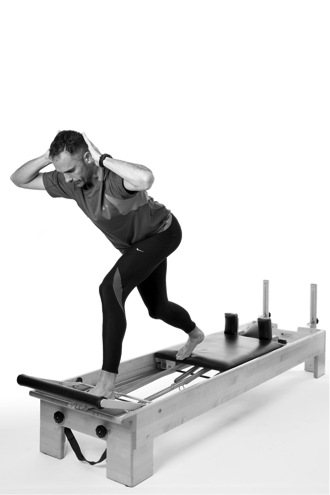 A great exercise for hip extension. Remember you need to ensure that the standing platform is in the reformer, so when someone first starts you are going to be standing next to them and they will need a pole or some other support to help.

Remember that once the three months has passed the gradual introduction for flexion and abduction of the hip should occur. The introduction of internal rotation can take much longer to achieve.  You need to be listening to your clients and checking what their tolerance for movement really is.

The resurfacing implants are designed to take out the least amount of bone as possible. A metal cap is used to cover the femoral head and this articulates with a highly polished metal cup.

The considerations for this type of surgery are similar to a total hip replacement.

Finally some general tips when working with hip replacements

Remember that when someone has had a hip replacement:

//   They will have trouble getting up and down off the floor, so don’t do that to them. Make sure you have them do any matwork on the caddie or even start developing work they can do by sitting on a little stool. It is amazing how much of the matwork can be adjusted to an Ikea stool!
//   Their gait and posture could have been affected by years of compensation to avoid the pain in their hips. Accordingly, foot and knee work are going to be essential. Working on the deep postural line of muscles will be essential to keep them upright;
//   They are going to have been on some serious pain killers, with all sorts of consequences for balance, memory and concentration. Make sure you know what they are on so you know how to work with the side effects. Also make sure that you know their taper plan, because you are going to need to make adjustments to their effort and tolerance during this period.

Carla Mullins is co-director and co-owner of Body Organics, a multidisciplinary health and body movement practice with 3 studios in Brisbane. Carla is a Level 4 Professional Practitioner with the APMA and has also studied pilates with PITC as well as Polestar. She also has a LLB (QUT), M. Soc Sc & Policy (UNSW), Diploma Pilates Professional Practice (PITC), Gyrotonic Level 1, CoreAlign Level 1, 2 and 3 and Certificate IV in Training and Assessment.