It seems that sometimes that you just get a flurry of clients, all with a similar issue requiring you to think about how you can modify pilates exercises and pilates equipment to get the best solution. These last few months it has seemed it was going to be the “year of the patella”, with multiple clients with patellar dislocations. This was then topped off when a long-time client slipped and fractured her patella, requiring surgery.

I will preface the following exercises and strategies by saying my most recent fracture client was highly compliant with rehabilitation, and always has been, with any of her multiple injuries. She rang me the day after her surgery to ask when she can start back at pilates class; we managed to hold her off for 5-6 weeks! We are not always so lucky when it comes to rehabilitation.

This article is mainly about the strategies for the patella fracture, in the early stages of recovery, however some of the exercises and issues are also relevant for our patella dislocators.

What does the patella do? 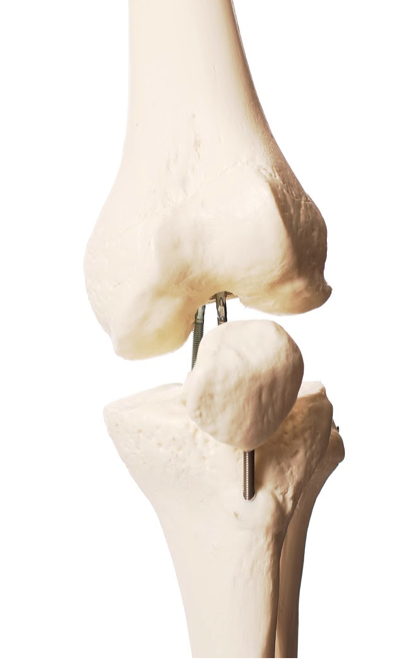 The patella is stabilised by both the medial patellofemoral ligament and the insertion of the horizontal fibres of vastus medialis, as well as the prominence of the lateral femoral condyle, which discourages lateral dislocation during flexion. The retinacular fibres of the patella also stabilise it during exercise.

When a patella fractures, it may be managed conservatively if the fracture is stable, but frequently it has to be put back together by a variety of titanium pins. Needless to say, post-surgery there are going to be a few issues regarding:

//     Bone repair. Repair will take longer because it is a sesamoid bone. The soft callus on the bone will form from six days to about six weeks with a hard callus by 3-4 months. Remodeling takes years. The main issue for sesamoid bones is that instead of coping with longitudinal compression forces (think weight-bearing on a tibia), the fracture site experiences high tension forces.

//     Joint surface repair. Any force large enough to fracture the patella will do significant cartilage and subchondral bone damage within the patellofemoral joint. Bony bruising (or subchondral microfracture) is painful and doesn’t cope well with further compression, often for a good three months.

//     Muscle and tendon repair phases. Because of the range of motion consideration, there is the fine line about letting the tissue repair itself, but not allowing scar tissue to create adhesions which will adversely affect muscle repair. The patella commences to undergo compression forces from 60-degrees of flexion (varies between individuals but from 30-degrees). Patella tendon excursion through range of motion will also affect the remodeling stage.

//     Muscle wastage and damage, particularly in the vastus medialis and quadriceps femoris muscles.

//     Painkillers, which can affect memory concentration and mood.

//     Instability in walking, particularly during heel strike phase, as the damage and swelling will make the extension difficult. Bracing will be an essential part of early rehabilitation in order to facilitate control in gait and during muscle/tendon repair and activity.

//     Difficulty in driving a car because of the need to use a clutch or a brake. So getting to a pilates appointment can be a bit of a challenge!

Our client was discharged from the surgeon around the 28 day mark and had the pleasure of some pretty strong physiotherapy work on her knee. At the six-week mark we had started the serious work on her knee rehabilitation. We have three months to get her ready for the surgeons review. We are only partially through the process of the rehabilitation but this has been our strategy to date.

For weeks 6-10, when the client is first allowed back into a studio setting, the focus is on providing space in the knee joint, strengthening the vastus medialis and activating hip extensors. Remember that as we extend the knee:

//     The vastus medialis and other quadricep co-contractions occur in the last 30-degrees of extension of the knee.

The exercises below were introduced progressively, in this order, over a period of two weeks. In the previous weeks the surgeon had been focussing on quadriceps/ hamstrings co-contraction and hip extensions.

Ball under the knee, extensions and encouraging the person to glide the tibia and then dorsi and plantar flex the foot. Then progressing to have the leg straighten and hold the leg up. 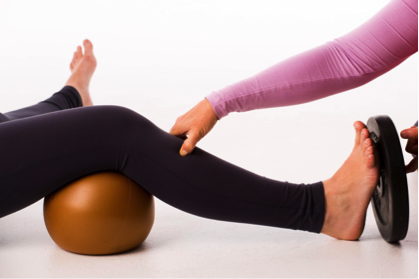 Essentially the exercise above, but have the person sitting on the trapeze table with the thigh cuff around the femur just above the knee, and hook that into a centrally hung medium spring on the thigh. The traction allows the femur to drop back further into the hip sockets, and facilitates improved vastus medialis activation.

Use the safety strap from the reformer to extend the size of the strap. Attach the loop to the end of a medium spring and slip a yoga block into the loop. The person can sit on the end of the trapeze table with their foot on the yoga block. The block allows them to fix their ankle and also the tibia. As the person sits on the edge with a rolled towel under the knee, they can slowly control the flexion and extension of the knee. 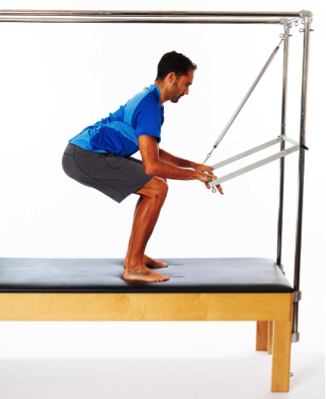 Feet are placed in the trapeze, to support at first and then progress from there.

Exercise: Clams with the towels as props

Using the towels as props for this exercise will help to keep the femur in the optimal alignment, deep in the hip socket. 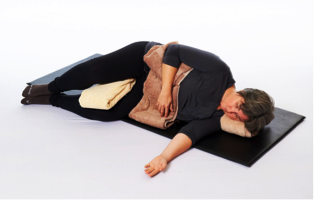 An addition of  the leg extension with holds. 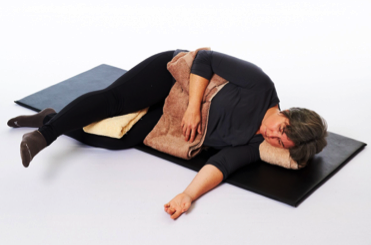 Place a HedgeHog under each glute in turn. This will release the glutes, and in particular the piriformis. 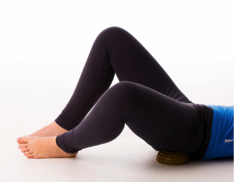 The focus of this exercise is releasing the shoulders and hands following use of crutches, as well as improving thoracic rotation and oblique activation. This version changes the focus to spinal segmentation in the transverse plane, similar to what happens in walking.

//     The top femur glides back into the acetabulum allowing the lumbar spine to spiral and segment backwards. To help with the femur glide I put a small ball between the legs.

//     As the spine starts to roll back, there is a tipping point at which the arm will roll backwards and then the head will tip back.

//     Reverse the spiral in the spine, starting from the head and segment the spine back to the pelvis.

As this  patient had previously had breast cancer, her shoulder issues from crutches etc were a bit more complex than usual, and so I am not going to cover those exercises here. That process is probably worthy of a very lengthy post in itself!

In the long-term we are going to have to focus on her gait and building her confidence in walking and how to respond to sliding surface. All going well we plan on using the CoreAlign around the 4-month mark.